Facebook is testing a new mobile ad format similar to the one it discussed at the Cannes Lions International.
Here are 5 things cool things about the new ad format:

1. Users don’t have to leave Facebook: Encouraging users to spend more time in the app engaging with ads will result in a higher quality of traffic and better campaign conversion for advertisers.

3. Form follows function, part I: The new Facebook mobile ad format is a natural evolution of the multiproduct ad formats that many e-commerce brands now utilize for their mobile apps.

4. Form follows function, part II: In fact, only 15 percent to 20 percent of searches that occur on a mobile device result in final purchases, The new Facebook mobile ad format should alleviate this problem by making the touch point between the advertiser and consumer much more accessible for mobile users.

5. Mobile video advertising on Facebook is here to stay: With the strong presence of video, Facebook is set to offer advertisers even more ways of bridging the gap between awareness and affinity and actual sales.

Re/code reported that the social network is testing the ads with a small group of brands—including Michael Kors,Gatorade, Mr. Porter and Carrefour Spain—adding that they start out resembling traditional Facebook posts, then open into full-screen representations of the brands’ websites.

According to Re/code, users can scroll through multiple pages of videos, images and text, most of which is hosted on Facebook.
Readers: Have you seen any of the ads that are being tested? What are your thoughts? 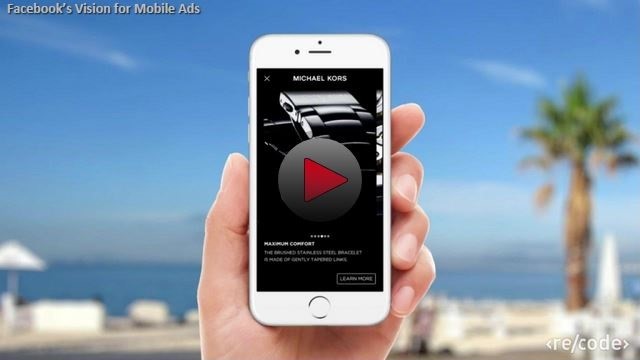 Image is courtesy of Re/code.