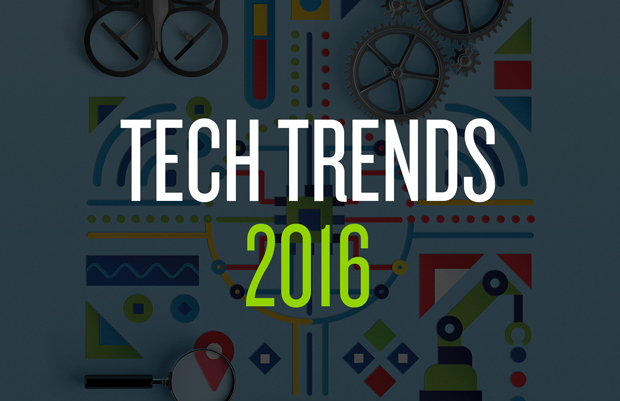 As we travel past the half point of 2016, we marketers should look back at the technology trends that have already made their mark on this year! They will serve as a foundation for a smarter future. Virtual reality, artificial intelligence and smart cars have made their appearance to the main stage in 2016. This is thanks in no small part to the hardware becoming commercialized and cloud technologies making way for multi-functional computing.

Back in early January at CES, the world’s largest annual tech convention, the number of vendors dedicated to cars, wearables, robots and drones was higher than ever before. The convention was estimated to be equivalent to the size of a whopping three-and-a-half football fields’ worth of space for smart-car technologies alone!

This convention set the stage for a 2016 of technology companies expanding into new niche markets, such as healthcare and auto, as their software products and services become increasingly ubiquitous.

Based on these developments, we’ve identified six trends that will rule the tech world!

In 2016, virtual reality finally got its chance to shine on a consumer level! Meanwhile, augmented reality continues to prove itself in the workplace. CES predicted 46 gaming and virtual reality exhibitors to attend their convention which was an increase of 68 percent from last year.

Juniper Research predicted there would be a “watershed year for VR.” So far, 2016 has seen the launch of Facebook Inc.’s FB, Oculus Rift, the first consumer-level virtual-reality headset that doesn’t require a smartphone like Alphabet Inc.’s GOOGL, Cardboard and Samsung Electronics’ 005930, Gear VR.

HTC Corp. and Valve’s Vive VR headset will also hit the market next year. The launch was postponed in December of 2015 when developers experienced a “very, very big technological breakthrough” that made the initial version obsolete, according to Engadget.

In addition to the new hardware, 2016 will also experience an increased focus on VR content in gaming and entertainment. The development of consumer-level 360-degree cameras has empowered amateur filmmakers and game designers access to virtual-reality shooting.

Meanwhile, augmented reality, which became a larger topic of discussion this year after Microsoft Corp.MSFT, showed off its not-yet-released Hololens headset at a product event. Eventually Microsoft released their newest innovating product in July.

At CES, vendors are expected to showcase real-world applications for these augmented-reality headsets. The new invention is going to enhance a person’s task on the job by interposing digital images like a map or instructions on top of objects in their surrounding environment.

Apple Inc. made people feel comfortable with the idea of wearing tiny data-collecting computer screens on their bodies with the April 2015 launch of Apple Watch. In 2016, it’s expected for more players to hop on this trend, and newer devices to be more capable.

At the convention for CES, there were at least 33 exhibitors showing off wearable technology. This was nearly triple the 12 in 2015! These devices were outfitted with sensors and showcased in ways that prove their applications in health, fitness and the enterprise market.

Soon, these devices will be able to connect directly to the Internet, without needing to tether to a third-party mobile device. This will enhance the stage for embeddable wearables, such as Chaotic Moon’s biometric tattoo, or tech tats, which attach to the skin much like a temporary tattoo.

At 200,000 square feet, automotive technology set the record of having three-and-a-half football fields’ worth of space at this year’s Consumer Electronics Show!

While it still may be some time to see fully autonomous vehicles, there has been recent movement from both a technological and regulatory standpoint that might help make 2016 a stand-out year for smart-car tech.

Last December, reports suggested Google and Ford Motor Co., could join forces to create a joint venture that will develop self-driving vehicles with Google’s technology. Meanwhile in California, regulators unveiled a proposal that would require licensed drivers to be present to operate an autonomous vehicle.

It will take a few more years for cars to become fully autonomous, but 2016 will likely be a year of partnerships between tech companies and auto manufacturers as they work toward the development of fully-autonomous vehicles.

At CES, there were at least 23 robotics exhibitors spanning 10,000 square feet, an increase of 71% from last year. Their robots spanned everything from at-home cleaners and companions to retail assistants similar to SoftBank Group Corp’s, Pepper robot, which rolled out across stores in Japan earlier this year.

French company Blue Frog Robotics has already released pre-orders for social robot called Buddy in 2016 that claims to interact with “each member of your family.”

Drones covered 25,500 square feet and had 29 exhibitors at the CES convention, more than quadruple the number of vendors as last year. Drone exhibitors showcased smarter drones, such as drones with tracking technologies, or those with additional sensors to more accurately read their environment.

This comes as drones continue to move into the consumer market, with the Federal Aviation Administration predicting that more than a million of the devices could be sold this holiday season.

The FAA is expected to introduce final rules for commercial drone flight in 2016. In 2015, it moved to enact rules that require operators to register drones of certain sizes. It also approved drone research flights for a number of commercial customers, notably Amazon.com Inc., plans to launch a drone delivery service called Prime Air over the next few years.

New technologies – some of which were showcased at CES – were designed to enable phones to charge through wavelengths. At CES, Ossia Inc. and Japanese telecom company KDDI Corp., showcased a product called Cota, that will automatically recharge mobile phones at a distance, similar to how WiFi transmitters deliver data from routers to devices.Cota serves as a central hub, sort of like a wireless router, that pushes out targeted energy through wavelengths to charge devices without having to plug them in or place them on a pad.

This follows existing technologies that take advantage of smartphones’ wireless charging standard, known as Qi. The company Qi Wireless, for example, produces pads that charge phones when placed on them.

Other companies, such as Israeli startup StoreDot, are interested to introduce instant charging and longer-lasting batteries. The company is pledging to showcase a battery next year that would charge a smartphone in 60 seconds or less.